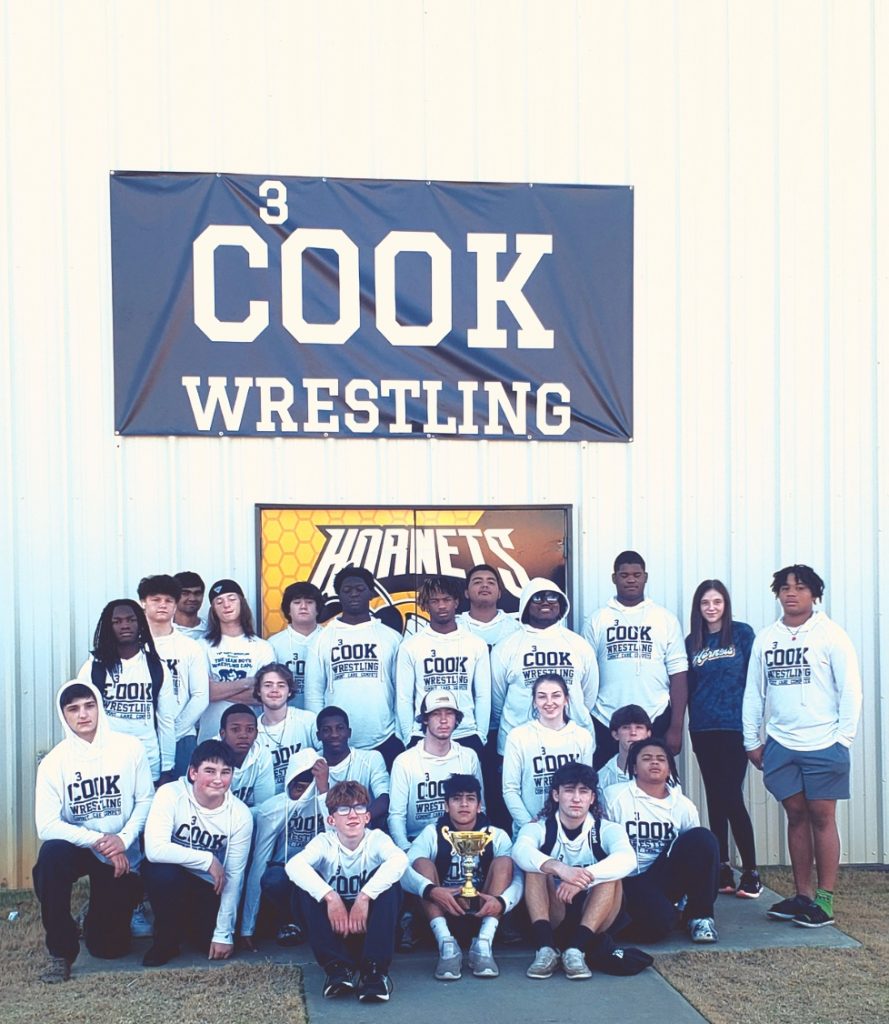 This past Saturday, January 7th, 2023, Cook Wrestling competed in its first competition of the new year. The Hornets traveled to Jeff Davis High School to compete for the 1AA Team Dual Area Championship.

“In wrestling, classifications 1A-3A have areas instead of regions like other sports. This is the equivalent of a region title for us,” said Head Coach Destry Walker.

The Hornets went into the tournament as the number two seed, having lost to Berrien earlier in the season. They received a bye the first round and then went on to wrestle two exciting duals in the semi-finals and the finals before being crowned champions for the third consecutive year!

The Hornets faced Jeff Davis in the semi-finals. Georgia Grappler predicted the Hornets to get upset by the Yellow Jackets. “It’s 2023; young athletes give too much respect to rankings and predictions that they see on social media,” Coach Walker said. “We started the season ranked fifth in the state as a team. When those preseason rankings came out, we immediately told our athletes that they do not mean anything! I believe instilling that mindset early really helped our athletes stay focused when the predictions came out last week showing that they were predicted to get third in the area.

“Our kids laughed about it and said, ‘They have no idea how much work we have put in,’ and they were right.”

The semi-finals dual with the Yellow Jackets started out rough for the Hornets. They only won one out of the first six matches, putting them down on the scoreboard 6-28. “At this point of the dual there were only eight matches left, and we had a lot of work to do,” Coach Walker said. “In wrestling, the only thing that matters is the next point scored in every match and dual meet. Our wrestlers understand this, so there was no panic from them. They buckled down and went to work.”

Cook wrestlers went on to win seven of the next eight matches. Sophomores Jed Rountree and Keigan Duke got the momentum to swing the Hornets’ way by picking up two pins at weight classes 157 and 165. Freshman Koby Palmore had a huge win at the 190 lb weight class! “Koby is a first year freshman wrestler that weighs 173 lbs, but is bumping up to fill the 190 lb weight class for us,” Coach Walker said. “Most athletes would use that as an excuse to go out and lose, but Koby is tough and loves his teammates and will fight for them. He went out and got the job done. That’s what good kids do.”

Freshman heavyweight Kyle Terrell also picked up a big win for the Hornets. “Kyle was on the junior varsity for most of the season,” Coach Walker said. “The wrestler in front of him was one of the best heavyweights in the state, but decided to quit over Christmas break. We have a very strict policy when it comes to quitting in our program; they are never allowed back. Having a freshman like Kyle work hard and  be able to step up and get the job done is huge! Again, that’s what good kids do!”

Those two wins put the dual out of reach for the Yellow Jackets and locked in a spot in the Area Finals for the Hornets.

The final dual between the Hornets and Rebels was an exciting match-up. It was a constant back-and-forth battle until the Rebels got three pins in a row at weight classes 157-165-175.

Again, freshman Koby Palmore stepped up and picked up a pin at the 190 lb weight class. This got the ball rolling for the Hornets as they would go on to win four of the next six matches!

The Hornets needed to pin the last three matches in order to tie the dual up. Junior Tristin Carter picked up a pin at 113. Sophomore Ja’shad Wallace has been out for six weeks with a shoulder injury and picked up a huge pin his first day back for the Hornets. Two pins were secured.

It all came down to the final match at 126 lbs. Freshman Logan Kennedy would face Rebel Junior Jaleel Matthews of Berrien. Kennedy put Matthews on his back three times, but could not finish the pin. With 41 seconds left in the second period, Kennedy was up by a score of 12-1, having only surrendered an escape to Matthews.

Kennedy turned Matthews to his back once again, this time… he finished the pin! This tied the dual meet at 42-42.

During the dual, the Rebels lost two team points due to unsportsmanlike conduct (taunting the Hornet bench). These two team points were deducted at the conclusion of the dual meet, resulting in a final score of 42-40 and a victory for the Hornets!

“We stress to our wrestlers to be good people before anything else,” Coach Walker said. “Our philosophy is to focus on creating successful, productive members of society and winning will follow. It is not having the better wrestlers that win us the dual meets. It is having a room full of kids with good grades, little to no discipline problems, that show up on time, don’t miss practice, and stand strong in their commitments, that win us the dual meets. We believe as a staff that if our athletes are not leaving our program and going on to college, the military, or getting a good job and being good parents that we are not doing something right.”

“It is fun winning, and it is really fun to think that this is just the beginning!” Coach Walker said. “This group of freshmen and sophomores were a part of the State Championship middle school team I coached two years ago. The sixth graders from that year will be freshmen next year; the whole squad will be back together! That is fun to think about, but right now it is time to focus on the next round. To be truthful our team is not pleased with making the State Tournament; they want to win it! They have the mindset that it does not matter if you make it if you do not finish and win a State Title!”

“All that being said, what is the most fun is watching these children grow into GOOD PEOPLE through our program,” Coach Walker concluded. “It is fun to watch them venture out of this community as adults and chase their dreams. It is fun watching them be successful, be good parents, and come to give back to the program!”

Please come out Saturday, Jan. 14, 2023, to support the Hornets in the first two rounds of the State Tournament at Cook High Gymnasium. Wrestling will start at 10 a.m. 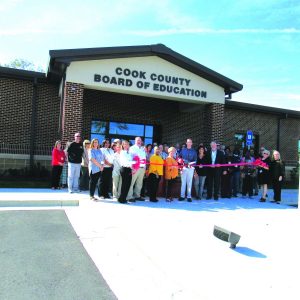