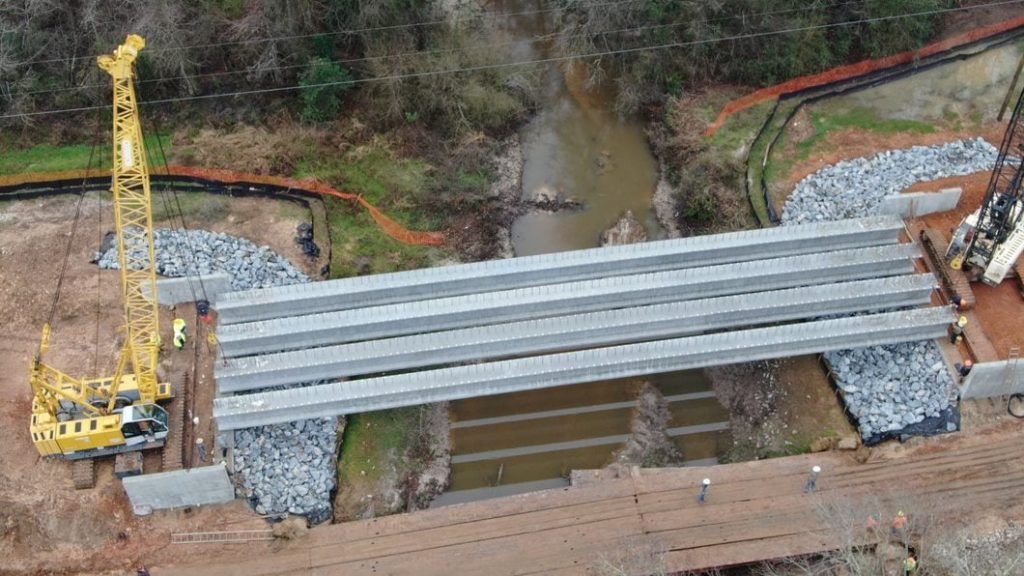 Recent shots of beams being set for the new SR 122 bridge over Mule Creek in Brooks County. The old bridge was built in 1940. The road closed at the bridge in November 2021. It’s about 33% complete. Total cost (preliminary engineering + construction) = $3.9 million. Photos: Edward Erb, Southern Concrete. Source: Georgia Department of Transportation – Southwest
These new images of bridge work underway at Mule Creek reminded me about the old stories of Confederate or French treasure buried in swampland southeast of that area. – Charles Shiver

Indiana Jones would have an exciting time in South Georgia if he ever came here to search for buried treasure and large artifacts hidden in snake-infested swamps and the deep, shadowy woods.

One of the best examples is a chest of Confederate gold supposedly covered by swampy earth near the forks of Okapilco and Mule Creeks in Brooks County.
Members of a wagon train hauling the gold from South Carolina to Vicksburg buried the chest one night for safekeeping. A marauding band of Indians attacked and massacred the party, leaving the gold concealed there ever since, according to the story.

Some old-timers claim that the stakes were much higher with the lost treasure in Brooks County. The bulk of the Confederate treasury was being transported under guard to Confederate Vice President Alexander H. Stephens’ relatives in South Georgia after Confederate President Jefferson Davis was captured by Union troops near Irwinville, Ga., on May 10, 1865. (The Northern media falsely reported that Davis had attempted to flee in women’s clothes, when in fact he was wearing his wife’s heavy shawl to protect himself from the chilly morning air.)
Then something terrible happened to the escorting soldiers as well as the gold at the fork of Mule and Okapilco creeks. Either Native Americans (which seems unlikely at that late point in Georgia’s history) or renegade Yankee soldiers murdered the Rebels and lighted out with the treasure.
The ancient storytellers claim that rusted horse bridles, rifles, pistols, and buttons from Civil War-era uniforms have been found in that area. 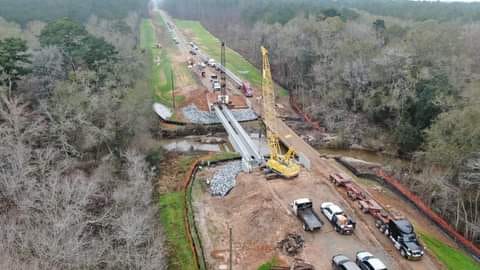 A similar legend holds that an iron arrow is driven through an oak tree near the banks of Reedy Creek in Colquitt County and allegedly points toward buried treasure or a cache of guns secreted by Rebs, when they saw their cause was lost near the end of the War Between the States.

In another version of the Brooks County tale, set in the year 1750, 50 Frenchmen on their way from New Orleans to the Georgia coast buried 2,500 pounds of pure silver in Brooks County’s Mule Creek Swamp one night. Indians (considered the all-purpose bad guys for frontier stories way back when the world wasn’t as politically correct) then attacked and killed all the Frenchmen, and the silver was left in the ground.

People have looked for and dreamed about the treasure for more than 270 years, if you give any credence to the French connection.
The swamp has holes all over it where treasure hunters have fruitlessly searched.

According to an article written by the late Gerald Hunter, a Brooks County resident, and published by The Atlanta Journal Magazine, Hunter gave up the search after many frustrating years of prospecting in the wilderness.
He and a friend did dig up some human bones and had a boy helping them run off at that point.
Hunter used a metal detector, but didn’t get any reaction from it. “Our investigations have been manned under all sorts of climatic conditions except good ones,” he wrote.
“In the first place, that swamp is 10 miles from the nearest road. In the second, unless things are very dry indeed, the creek forks area is a pond. We don’t know whether the massacre occurred in a wet or dry season.
“Near the forks of the Okapilco and Mule Creeks lie the bones of valiant Frenchmen, I am convinced. Not too far from the bones lie 2,500 pounds of silver.
“And not too much farther from there lies – in storage – a $300 treasure finder that I will sell – cheap.”

I keep wondering, however, what could be done as far as the treasure hunt is concerned using some of the near-magical technology available these days, including ground-penetrating radar, GPS, satellite imaging, and so forth. Maybe it’s sometimes best to just let a mystery stay mysterious or a legend to remain legendary.
(When I got the information for this story, I expressed thanks to Betty Horton with the Quitman-Brooks County Historical Society, for graciously helping me to research that information. Her late father James R. “Jimmy” Knight wrote about hunting for the Confederate gold as an assistant scout master in 1928 or 1929.)