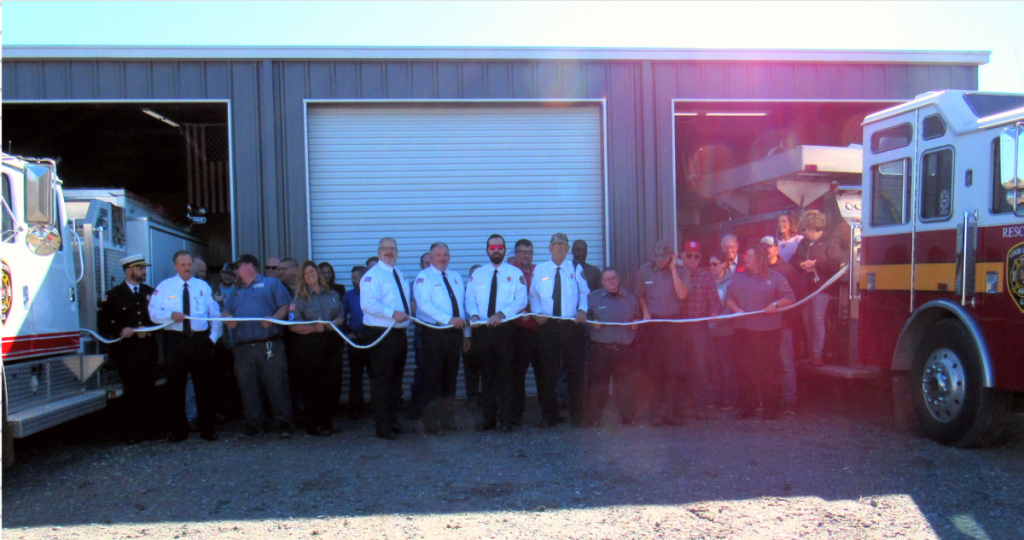 People who attended the dedication participated in a hose uncoupling ceremony, traditional for new fire facilities, very fitting considering that the County has not built a new fire station in about 15 to 20 years.

“After several months of planning and construction, we are finally finished,” said County Fire Chief Johnny West. “We are very thankful for everyone who helped with this project. …

As we talked about today, this is a milestone with the County Fire Department, and we are looking forward to updating other stations and working towards building the next one.”

The County Fire Department offered a very special thanks to the Cook County Board of Commissioners, Elite Steel (which donated the building components), and The Cotton Gin (Edd and Fred Powell, who donated the half-acre of land to the County for the project) for all their support and contributions.

The planning and building of the station took “a lot of blood, sweat, and tears” by the volunteers, Chief West said. “We hope it will be a flagship for the other stations.”

The air hoses and electrical lines hang from the ceiling in the new station. This prevents the trucks from continuously running over the electrical lines on the floor, as in previous station setups, and creating the risk of fire. Having the air hoses available allows the trucks’ air brake systems to quickly be filled with the right air pressure to roll and saves precious response time that could make the difference in saving a life or home.

County Commission Chairman Dwight Purvis spoke about the trucks and equipment that the County has obtained to improve the Fire Department in recent years. He thanked the citizens for their patience with the delays caused by the COVID pandemic to the new ISO testing and results. He added that the County will need to replace the fire trucks with newer, better models in coming years.

Chief West presented challenge coins to people in attendance at the dedication who have been especially strong supporters of the Fire Department.

During the dedication ceremony, West’s wife Regina, a volunteer firefighter herself, announced that the Fire Department has formed an Auxiliary that will be offering memberships to people in the community. She also said the Auxiliary plans to start a Jr. Fire Cadets program for kids, to get them interested at an early age in becoming firefighters when they are older.

Mrs. West presented plaques on behalf of the Fire Department Auxiliary to Chief West and Todd Sumler, Assistant Station Chief, in recognition of their hard work and time spent in building the new station. Chief West said Sumler was basically the “general contractor” for the building project during whatever free time he could spare while working in his full-time job as a Nurse Practitioner.

Recent fire protection improvements have resulted in ISO ratings being reduced (improved) from 9 or 10 to 5 in many areas of the county. The Cook County Fire Department is working on adding more members and plans to have seven new volunteers by the end of the year. The current Fire Department roster has 45 volunteers. They received a total of 2,000 hours of training this year. Chief West said the County Fire Department will be looking to do more with their joint training facility with the City of Adel Fire Department.

The North Cook Station has a mutual aid agreement with the City of Lenox Fire Department and will respond to assist the Lenox FD with fires within the city limits.