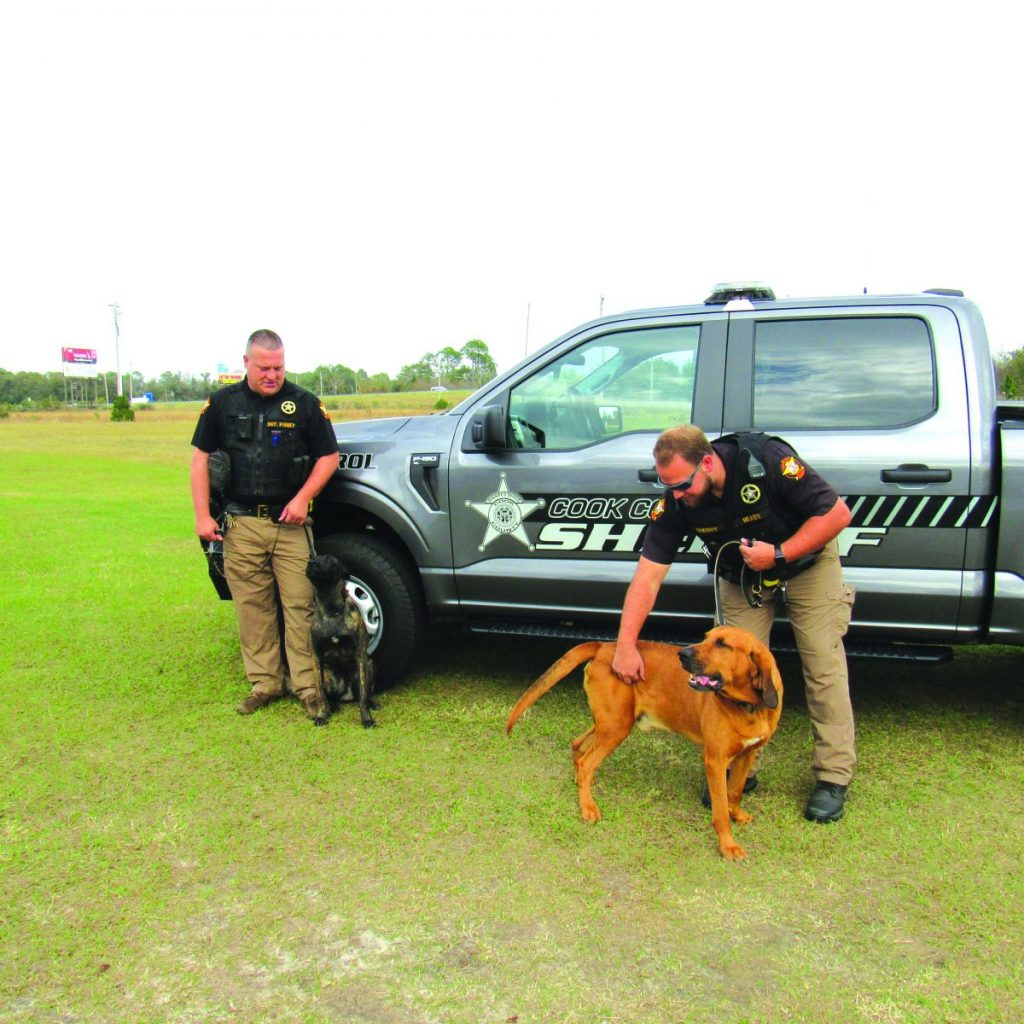 Cook County Sheriff Doug Hanks is proud to announce that for the fourth year in a row (2019, 2020, 2021, and 2022), K-9 Dallas, the Sheriff’s Office bloodhound, has won first place for tracking in the Floppy Ear Dog Division at the South Georgia K-9 Conference. Hosted by the Dooly County and Houston County Sheriff’s Offices, the event was held Nov. 14 to 18, 2022, at the Georgia National Fairgrounds & Ag Center in Perry, Ga.

The local K-9 teams competed against 109 dog teams from all over the U.S., from as far away as Alaska. The local teams earned certification at the 13th Annual National Narcotic Detector Dog Association Inc. Workshop.

Deputy Cliffton Heath, Dallas’ handler, said the 7-year-old K-9, won first place for floppy ear dogs, including bloodhounds, retrievers, and Labradors. “He is a mean tracking machine,” Heath said. “He’s almost like a celebrity up there.”

Dallas has been serving with the Cook County Sheriff’s Office for five years now. He has done a great job, helping to locate missing autistic children and an elderly citizen. Last week, as far as finding target offenders is concerned, Dallas and Fievel located two defendants who ran from a pickup that crashed after a high speed chase on I-75. The tracks led for miles through woods and a swamp near Sparks.

Sgt. James Finney is handler for Fievel, a full patrol dog who has turned 2 years old.

K-9 Fievel joined the Sheriff’s Office in November 2020. He is a full patrol dog for narcotics, tracking, criminal apprehension, and evidence recovery (firearms, for example). He became certified for narcotics and tracking at the age of only four months. Fievel was born and raised completely in Cook County.

Fievel has been especially effective in narcotics detection during traffic stops on I-75.

Fievel recently received a bullet and stab protective vest thanks to a charitable donation from non-profit organization Vested Interest in K9s, Inc. Sheriff Doug Hanks wished to thank everyone involved in the donation and encourages the public to visit Vested Interest’s website to see all the amazing things they do to assist K9s and their handlers

K-9s Dallas and Fievel work together as a team, Sgt. Finney said. He noted that a quality that earned Fievel second place for Apprehension is that he follows commands, as demonstrated by his standing down from catching a mock “subject” during an exercise at the South Georgia K-9 Conference when ordered to do so, and not continuing to bite and pursue. Dallas has a stubborn streak, but he also has a super skills set for tracking.

Meanwhile, Sheriff Hanks is proud of another certified K-9 working for the Sheriff’s Office, Uri, a German Shepherd, who joined the Sheriff’s Office in March 2018. He is a narcotics and tracking dog originally from Germany. Corporal Winfred “Junior” Dowdy serves as Uri’s handler.