A crowd from all walks of life turned out Monday morning, Oct. 10, 2022, at the funeral services at Cook Memorial Stadium for the man who touched the lives of so many, Terry Arnold, posthumously promoted from the rank of Captain to Major with the Cook County Sheriff’s Office.

Showing the reach of this tragedy, Governor Brian P. Kemp and his wife Marty attended the funeral services for Mr. Arnold, 59.

Mr. Arnold, Badge # Cook 50, affectionally known all over the world as “Turtle,” suffered an apparent fatal heart attack after dispersing a fight between two students that occurred at Cook High School on Monday, Oct. 3.

Mr. Arnold, with the assistance of school administration, had taken a juvenile involved in the fight into custody and was exiting the main entrance of the school when he collapsed. School medical personnel and responding backup immediately rendered aid until the arrival of Emergency Medical Services. Mr. Arnold was transported to South Georgia Medical Center, where he was pronounced deceased a short time later. Mr. Arnold, well renowned in law enforcement circles in Cook County and the State of Georgia, had just completed his 26th year at the Sheriff’s Office, where he had served in every facet of the office including his current assignment as supervisor and director of the School Resource Officers Division for the Sheriff’s Office and the Cook County School System. He had previously served the City of Adel Department  and City of Remerton Police Department.

Mr. Arnold’s death was the first recorded line of duty fatality in the history of the Cook County Sheriff’s Office.

On Wednesday, Oct. 5, the Cook County Sheriff’s Office and other law enforcement and public safety agencies joined a procession escorting Mr. Arnold from Georgia Bureau of Investigation headquarters in Atlanta back to Purvis Funeral Home in Adel. Crowds lined the route in Adel to show their appreciation for Mr. Arnold.

The Sheriff’s Office, along with assistance from the Cook County Probate Court and courthouse staff, set up a memorial with Mr. Arnold’s vehicle in front of the courthouse. The public was invited to stop by, pay their respects, and sign the guestbook or leave messages or mementos for Mr. Arnold’s family and friends.

Chad Sumner, one of the speakers who officiated at the services, described Mr. Arnold’s passing and the resulting overwhelming community response of grief and support for Mr. Arnold’s loved ones as “one of the biggest events in Cook County history.” 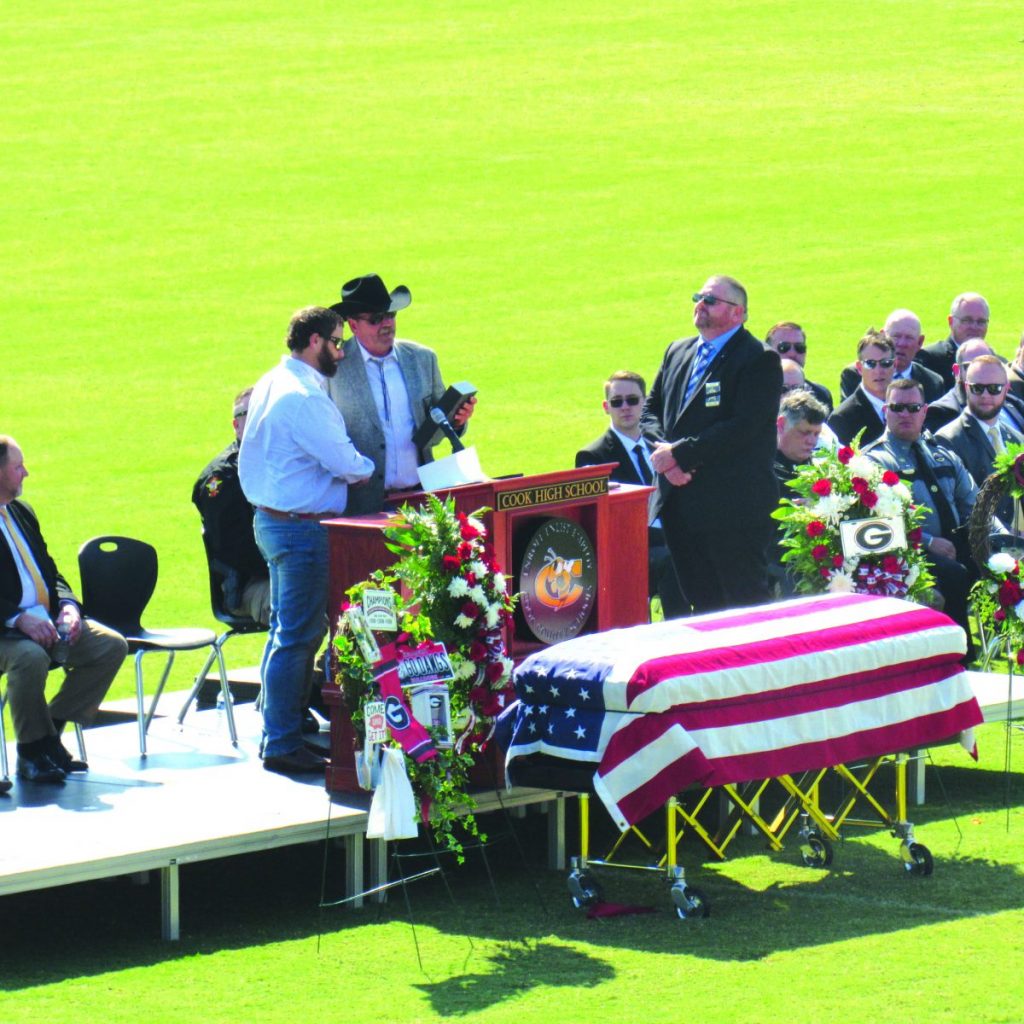 “I’ve never seen such an outpouring of love like this in my life,” said Mr. Sumner, who thought of Mr. Arnold as a brother.

Mr. Sumner described what Heaven might be like for Mr. Arnold: “I’m sure he’s up there now with a slab of spare ribs on the grill and singing ‘Coal Miner’s Daughter’ with Loretta Lynn, because she went up the day after him.”

Mr. Sumner quoted John 15:13: “Greater love hath no man than this, that a man lay down his life for his friends.”

“Terry dedicated his life to serving this county and this school system, and he laid down his life while doing what he loved to do, serving,” Mr. Sumner said.

Judge Chase Daughtrey, who also officiated at the service, detailed how Mr. Arnold drove survivors of the deadly 2017 tornado that devastated Sunshine Acres Trailer Park from that area into town in a school bus, and how Mr. Arnold consoled a man who was missing a sibling. “Terry through his love and compassion comforted this man in a way I had never seen before,” Judge Daughtrey said. “I can honestly say I saw the Lord work through Terry to bring that man peace in that moment.” Judge Daughtrey also spoke about Mr. Arnold cooking for those in need when he was not in a financial position to do so, and Mr. Arnold’s taking a young man to away football games for the Cook High Hornets.

“Each of us has a duty to carry on Terry’s legacy because of the difference he made in our hearts and in our lives,” Judge Daughtrey said. “His contribution to this community and this state will live for generations to come. There’s one thing that’s evident. Terry had a profound impact on thousands of lives.

“Terry’s life was his canvas. As I look around this stadium, and this town over the past week, I see that Terry has painted his masterpiece.”

Capt. Brent Exum with the Cook County Sheriff’s Office also spoke at the service. Capt. Exum said Mr. Arnold was a loving father and a loving grandfather. Capt. Exum said Mr. Arnold was already a staple in Cook County law enforcement when he (Exum) joined local law enforcement in the early 1990s. “He cast a big shadow,” not just in physical size, Capt. Exum said. “I’m talking about his ability to talk to anyone, to handle any situation, no matter how dangerous, without having to resort to aggressive or heavy-handed tactics.” He said the Governor could have sent Mr. Arnold to law enforcement agencies around the state to show his own version of the de-escalation training now in place.

Shortly after Capt. Exum first started working with the Sheriff’s Office, Mr. Arnold was Capt. Exum’s direct boss and partner in Criminal Investigations. Mr. Arnold worked in every division of the Sheriff’s Office at one point in time or another. He ended up in the position of Captain over the School Resource Office Program. “If there has ever been a better SRO, I have never met him,” Capt. Exum said, adding that Mr. Arnold was so proud to be a big part of the Hornet Nation. Mr. Arnold loved all the children in the schools and was proud of their accomplishments, just like he felt about Capt. Exum’s children.

Capt. Exum asked anyone in the audience to stand who had been positively impacted by Mr. Arnold’s work as an SRO or deputy sheriff, or if their children had been. Many rose from their seats.

Lt. Trent Exum with the Sheriff’s Office also spoke in memory of the man who hired him 22 years ago. Lt. Exum said Mr. Arnold taught him a lot about policing and about how to treat people while serving the public. Lt. Exum also shared some humorous stories involving Mr. Arnold, including his famous grill called “Bertha.”

The services concluded with a video on Mr. Arnold made by the high school A/V students (George Strait’s song “The Weight of the Badge” accompanied the images and recorded remarks by Mr. Arnold) and the playing of “Amazing Grace” on bagpipes. The Georgia State Patrol Aviation Division conducted a fly-over of the stadium with three helicopters.

The funeral procession then departed for the interment at Greggs Baptist Church. On Highway 37 by the high school, the procession passed under a giant American flag difsplayed on an Adel Fire Department ladder truck. Law enforcement agencies and fire departments from across the area joined other citizens in the procession.