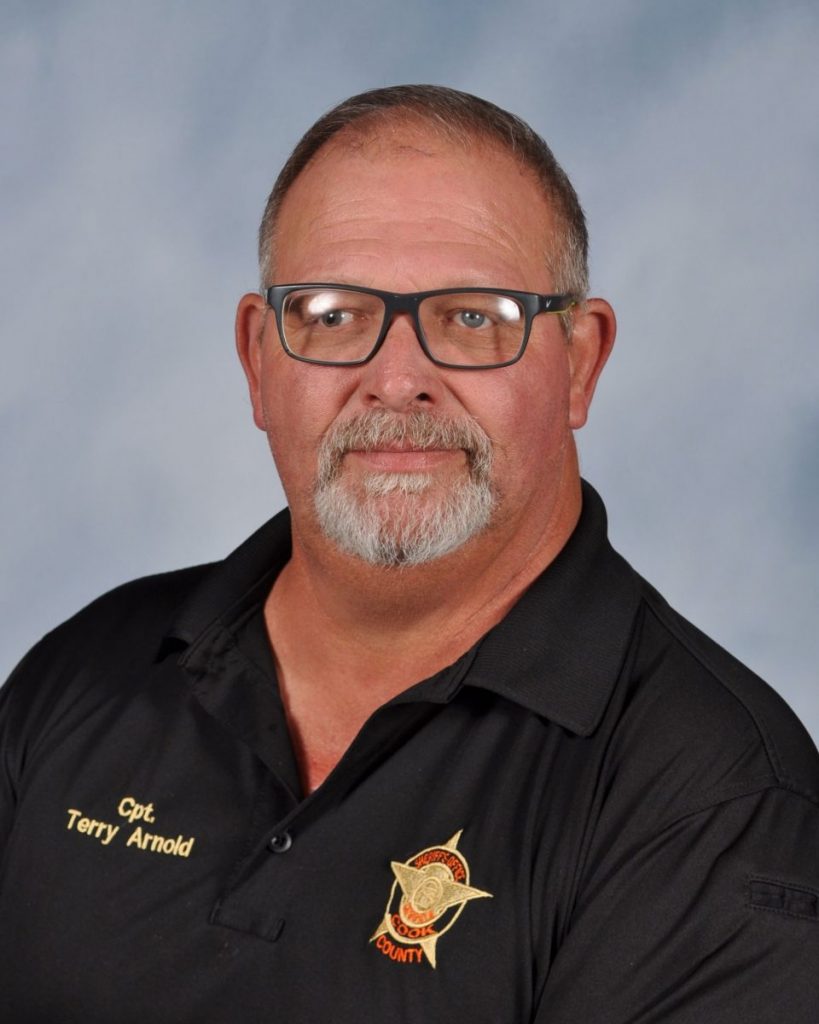 We at the Adel News are saddened by the loss of our community’s friend, Mr. Terry Arnold. To know him is to love him, and he was a great friend to all. We challenge all who knew him to do just what he would want us to do – spread love and laughter, as he was known to do. Our prayers go out to all of his family, friends, and his CCSO family. He will be missed.

It is with profound sadness and tremendous grief that Sheriff Doug Hanks and the Cook  County Sheriff’s Office announces the passing of Captain Terry Arnold, badge# Cook 50.

Captain Arnold, affectionately known all over the world as “turtle”, suffered an apparent  fatal heart attack after dispersing a fight between two students that occurred at Cook County High School.

Captain Arnold, with the assistance of school administration, had taken a juvenile involved in the fight into custody and was exiting the main entrance of the school when  he collapsed. School medical personnel and responding backup immediately rendered  aid until the arrival of emergency medical services. Captain Arnold was transported to South Georgia Medical Center where he was pronounced deceased a short time later.

Captain Arnold, well renowned in law enforcement circles in Cook County and the State  of Georgia, had just completed his 26th year at the Sheriff’s Office where he had served in  every facet of the office including his current assignment as supervisor and director of  the School Resource Officers Division for the Sheriff’s Office and the Cook County School  System. He had previously served the City of Adel and City of Remerton Police  Departments.

Captain Arnold loved and was loved by Cook County and the entire South Georgia  community. He also loved to cook and his skills on the grill were as famous as he was. He  was an avid fan of the Georgia Bulldogs, Atlanta Braves, and above all the Cook County  Hornets.

Captain Arnold is survived by his son, four daughters, and ten grandchildren as well as  countless friends, family, coworkers, and colleagues.

He is the first recorded line of duty death in the history of the Cook County Sheriff’s  Office.

At this time arrangements have not been made but will be announced soon.

“We are saddened by the passing of our very own SRO, Captain Terry Arnold. Captain Arnold loved CHS and all of the students here. He loved to laugh, cook for everyone, joke around, and help any student who needed it. He had a heart of gold and will truly be missed.”

Cook High began having  counselors available Tuesday morning for students or faculty who need to talk with someone about this loss.

Just a few of the hundreds of positive comments about Capt. Arnold on social media:

State Senator Russ Goodman remarked: “South Georgia lost a great American, and we all lost a great friend today. My thoughts and prayers go out to the Terry Arnold family and everyone in Cook County who knew and loved him.”

Ginny Dhondt: “One of the first friends I made when I moved to Georgia in 1990. Was just as good of a friend 32 years later. This one hurts deep. Everybody loved Turtle. Sending prayers to his family.”

Jennifer Washington: “Mr. Terry stopped by the Wiregrass GA Tech-Cook Campus often just to check on us. What an amazing person with an infectious laugh. Thank you for everything.”

Laura Hamilton Nipper: “Mr. Terry was my next door neighbor as a child and later worked with my Big Mama at the Cook County Sheriff’s Department. When she had her stroke, he carried her out of her house to the ambulance and then stayed with me at the hospital until my uncle could get there. I will NEVER forget how kind and gentle he was. I am heartbroken to hear of his passing.”

Rita Posey: “Our community mourns the loss of an amazing friend today. I don’t even know how to feel. From cooking me shish kabobs at Berrien County Saddle Club and coaching the team I cheered for in middle school to loving my kids as they came through school, I can’t remember a time in my life when Turtle wasn’t one of my best friends and biggest supporters in life.

“My entire family is so saddened to hear of  the loss of our dear friend. My children thought you were our family. I have so many stories, and we shared so many great times together. I never would have thought our conversation at the Sheriff’s Tournament would be our last. I’m glad I hugged you big and God laid it on my heart to tell you thank you for always being so good to me. What a blessing that I was given that moment.

“You always made me feel like a big deal…. You, my friend were the big deal!!!

“You left a mark on this community that can never be forgotten. I thank God you were my friend!! Terry Arnold, I say farewell until we meet again.”

Capt. Arnold loved grilling food for special events and fundraisers, and reportedly was planning to compete in the Chamber of Commerce’s Cook-Off Classic later this month.

Funeral arrangements for Capt. Arnold are to be announced.