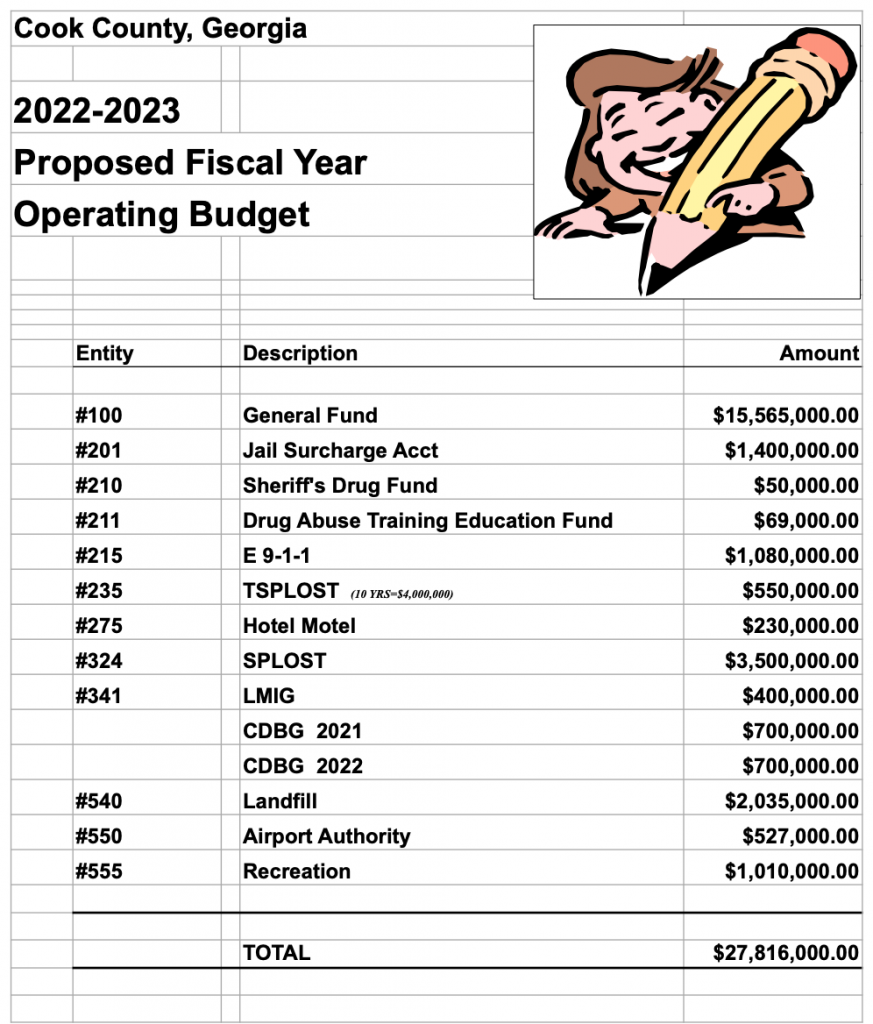 During the Monday, Aug. 15, 2022, meeting of Adel Mayor and Council, City Manager John Flythe said there has been a lot of conversation concerning the County’s reevaluation of property, which is required by the state. He noted that reassessments were up from year 2021 to 2022 by approximately $10 million, and that there had been a natural gain in personal property.

Last year, the City of Adel’s tax rate was 6.387 mills. In order to not have the public hearings advertising a tax increase, the City would have to roll back the tax rate to 6.000 mills. If the City rolled back the rate, it would be “a neutral effect to our citizens,” Flythe said.

Flythe noted that some of the growth was from the Cook County Airport as well; there have been approximately 20 airplanes added at the airport.

Councilman Jody Greene made a motion to roll back the millage rate to 6.000 mills. Councilman Terry McClain seconded. There were no opposing votes.

Other business during the Monday, Aug. 15, 2022, meeting of Adel Mayor and Council:

Councilman McClain gave the invocation, followed by the Pledge of Allegiance.

Approval of minutes Councilman Paige made a motion to accept the minutes of Aug. 1, 2022, as presented. Councilman McClain seconded. All were in favor.

The Council was presented with an alcohol license application filed by SRI Holiday Mart, LLC, located at 415 S. Hutchinson Ave. All fees have been paid, and there was no criminal history record on the applicant.

Councilman Greene made a motion to approve the issuance of a license. Councilman Paige seconded. The decision was unanimous.

Property abatements  City Attorney Tim Tanner discussed five properties that the judge had declared an order for a public nuisance after a complaint was filed in Municipal Court.

Councilwoman Hayes questioned about the sixth property. She was advised that because of an incorrect address, the City will have to come back and do that one, along with a few others.

The city manager advised that he would like to get prices from contractors to tear the properties down; or, the City can use its own equipment. He noted there would be a landfill cost as well; however, there is a special location to place block in the landfill. He would bring the costs back to the Council.

Councilman Cowart made a motion to accept the order for the property abatements as read.  Councilman McClain seconded. There were no opposing votes.

City Manager John Flythe reminded the Council that city officials had discussed Plant Vogtle at the last meeting, and that once Plant #’s 3 & 4 hit a certain cost amount, Georgia Power had agreed to tender (buy down the City’s share).  He noted that the other owners are Oglethorpe & EMCs (Electric Membership Corporations);  City of Dalton; and Municipal Electric Authority of Georgia (MEAG) & MEAG Cities.

Adel officials were told that if one city voted not to sell, that would negate anyone to sell to Georgia Power. Because several cities had voted no, the City of Adel took the same position.

Adel’s consultant has read and is familiar with the City’s sales contract with MEAG. He has asked if the Council would agree for Adel to tender its portion to put out and market among the MEAG cities. “This has nothing to do with Georgia Power and the buyout on that side,” Flythe explained. “Our cost next year will be over $1 million. We will have the cost for 20 years.” He added that if the City of Adel could sell it, he would sell it.

Councilwoman Hayes asked if it was more beneficial to sell than not to sell. Flythe advised, “Absolutely. We would not recoup our costs for a number of years so it would be financially beneficial.”

Mayor Duke questioned if Adel did need extra energy, the City “could go to the market and buy as cheap as what we could buy now?”

Flythe advised that typically that is true. He noted that in 2021, gas prices were less than $4 per unit. Today, it is $9 per unit. “With the energy craze right now, natural gas dictates the clearing price,” he said. He noted that one customer is buying off the market, which is Blockstream.

Councilman Cowart made a motion to offer up the City of Adel’s portion of Plants 3 & 4 to the other MEAG communities for 20 years. Councilman Greene seconded. All were in favor.