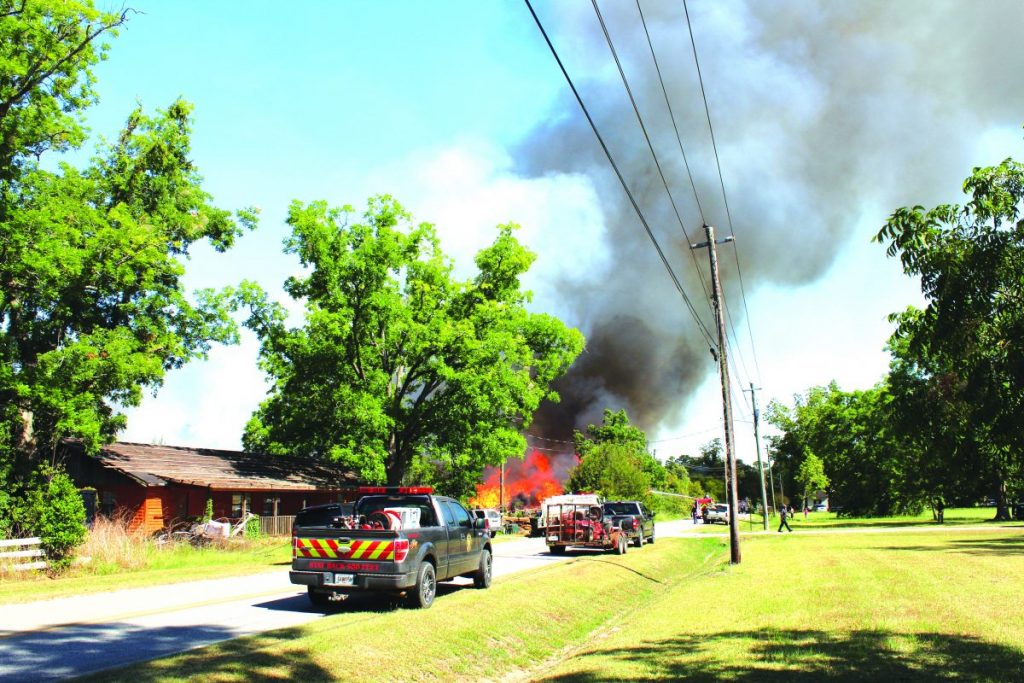 The biggest fire at a local business in many years burned up eight acres of product and equipment last week at Guthrie Lumber Company on Union Street in Cecil.
The blaze broke out at about 3:45 p.m. on Wednesday, June 22, 2022, at the company’s saw mill and spread rapidly through the lumber yard. Area residents for many miles around could see a mammoth black column of smoke rising out of the conflagration.
Firefighters battled the blaze to the point of exhaustion in 102 degree summer heat throughout Wednesday afternoon, and then into the evening. No injuries were reported. EMS stood by if needed to assist the firefighters.
The dry weather created the conditions for a massive fire with such low humidity. Thankfully, there was no wind, or a much larger disaster could have erupted.
Cook County Fire Chief Johnny West said he considered the fire response operation to be a success because no lives were lost and neighboring homes were saved. Fire personnel contained the flames to the point that the office building, the company’s main saw, and two endangered nearby homes were spared. However, customers’ lumber on the yard was a major loss.
“Without the outpouring of help from our neighboring fire departments, citizens dropping off water, citizens pulling fire hoses, and a small business providing some relief from the heat, this would not be the successful operation it was,” Chief West said.
Chief West gave “a profound thank you” to the following first responders and supporters: Berrien County Fire Department, Brooks County Fire Department, Lowndes County Fire Department, Lenox Fire Department, Sparks Fire Department, the Georgia Forestry Commission, Ray City Fire Department, New Lois Fire Department, Georgia Power Co., Kona Ice, Norfolk Southern Railroad, Cook County Sheriff’s Office, Cecil Police Department, American Red Cross, Grady/South Georgia EMS, Cook County Road Department, “our 911 dispatchers, and the countless citizens who brought water and Gatorade to us.”
Last but not least, Chief West said, “Thank you to the men and women of our Cook County Fire Department! You are an amazing, dedicated, hardworking group of people that we are all so grateful for.”
The fire started when a motor bearing went out on a wood planer that was in operation and sparks caught a pile of sawdust and wood debris on fire, Chief West said. The flames quickly spread across the lumber yard where years’ worth of sawdust and old tree bark had collected.
Fire personnel have continued to be called back to the scene over the last several days to deal with flare-ups at hot spots. They had to extinguish some burning tires near railroad tracks and a fire in neighboring woods, Chief West said.
The Georgia Forestry Commission has cut several firebreaks in the area, and the owner brought in a front end loader to clear out some of the material that was contributing to the resurgence of fires.
Rain on Friday night helped stop more fire breakouts.
Established in 1992, Guthrie Lumber, a family-owned and -operated business, serves the South Georgia and North Florida areas. Mr. Vernon  Guthrie, a 102-year-old D-Day veteran of World War II, owns the business.
The Guthrie family hopes to get the company back up and running despite their major losses.
A GoFundMe account has been set up to assist the Guthries with rebuilding and covering lost income.