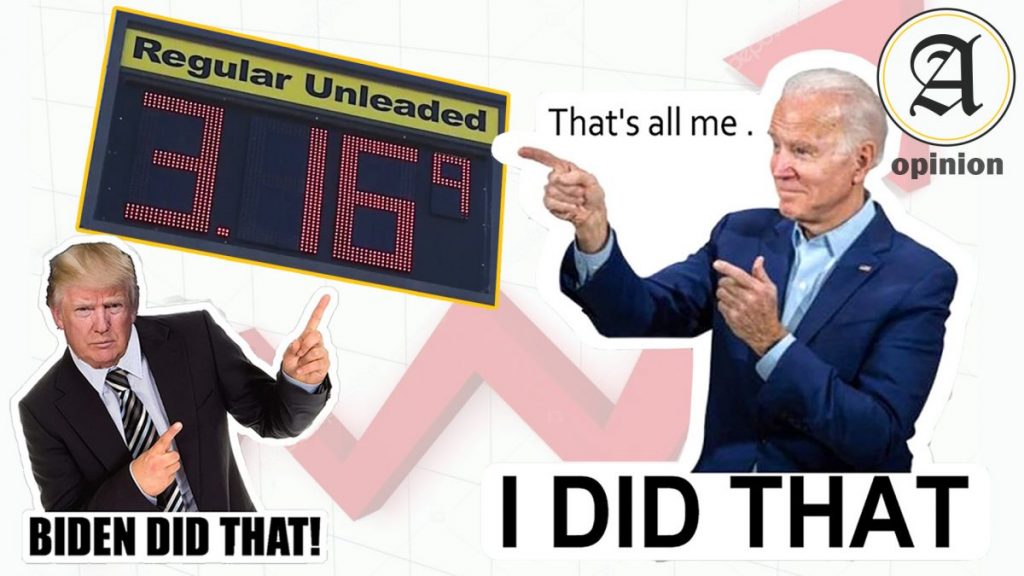 By Dalton Yawn
Whether you’re a Republican, Democrat, or something in between, almost all of us can agree that gas prices are skyrocketing. Many are blaming the Biden administration for the sudden surge in gas prices, but does the President really hold the key to how much we pay at the pump? It seems that every election year, those running promise they will tackle the gas price problem, but in all reality, there are way more factors that go into the price of gas than what the average American may actually think. Currently, the United States is seeing the highest price of gasoline since 2014, largely due to supply and demand issues. Within the last few months, Americans have hit the road again for the first time since the COVID-19 pandemic has subsided, and the sudden influx of demand paired with the disruptions in domestic supply caused by shipping issues and trouble in overseas markets have caused gasoline prices to spike.

When calculating the price of gas, retailers have several things to consider. The cost of crude oil, refining costs and profits, distribution and marketing costs and profits, and taxes all have a hand in how much it costs us to fill our cars up. As much as we like to think that the President and our government can just flip a switch and eliminate pricey gasoline, it’s
not quite that easy.

The largest component of the retail price of gasoline is the cost of the crude oil it takes to produce the gasoline in the first
place. The price of crude oil varies over time and the regions where it’s sold. The global market sets the price of crude oil, and it’s based on supply and demand. Market location and quality differences in shipments of oil helps determine the crude oil price for specific countries, as well. Lower quality oil will cost less than more well-refined oil.

Another factor to consider in the price of gasoline is the cost of actually producing the gas itself. Gasoline is made through a process called fractional distillation. Fractional distillation is the separation of crude oil into more useful hydrocarbon products. The products are separated in a distillation tower based on their relative molecular weights. After gasoline is produced, it is distributed to different retailers through pipelines, and the price for a barrel of gasoline varies depending on the season, the equipment used at the refinery, and the cost of other ingredients that may be blended into the gasoline, such as ethanol. As of June 2019, gas has cost somewhere between $50 and $70 per barrel, and the United States used about 2.95 billion barrels in 2020. That comes out to be being around 148 billion dollars or more worth of gas consumption in America alone. Factoring in other countries’ needs for gasoline, the price to run an oil company is tremendous.

Federal state, and local taxes also add into the price we pay at the pump. The federal tax on gasoline is about 18.40 cents per gallon, which also includes an excise tax of 18.30 cents per gallon. The federal government also charges a Leaking Underground Storage Tank fee of 0.1 cents per gallon. Much of the revenue gained through gasoline taxes is put towards fixing highways and infrastructure projects. Biden could presumably lower the taxes imposed on gasoline, but that seems unlikely to happen anytime soon. In addition to these federal taxes, total state taxes and fees averaged about 30.06 cents per gallon as of January 1, 2021. This further pushes the price of gasoline skyward.

The cost of running a gas station also plays a major factor in what we pay at the pump. Retailers have bills to pay. Employees’ wages and benefits, the equipment used at the pump, lease or rent payments of the store, insurance, and local fees that may be imposed on the gas stations all play a part in how much gasoline will cost. Location affects gas prices, but cost can even vary between stations located right across the street from each other. Stores may have different traffic patterns, rent, or supply sources than others. Local competition between stores will also play a factor into what a retailer will sell their gasoline for. If a store has cheap gas, then a different station nearby will drop their prices to catch the attention of customers in order to make a profit.

Taking all of this into consideration, is there anything that the President can do to help mitigate the rising price of gasoline? Honestly? Not really. Increasing the global supply of crude oil would cause lower prices overall, but American oil companies answer to shareholders, not the government. The President can’t decide to just have more oil in the world. Many of the largest oil-producing countries on Earth are part of the Organization of the Petroleum Exporting Countries (OPEC), which controls a large portion of the oil supply and reserves in the world. The Biden administration could reach out to OPEC and ask them to bring more oil to the American market, thus lowering oil prices, right? Well, that’s the problem. The Biden administration already did that and were promptly rejected.

Biden released oil from the United States’ underground stockpile of crude oil called the Strategic Petroleum Reserve. It helped increase the supply of oil in the United States market, which dropped prices by a few cents for a while. Unfortunately, since the reserve is made up of crude oil, gasoline would still have to be produced, and we’ve already discussed how expensive that process is. On top of that, the Strategic Petroleum Reserve is a finite source: It will eventually run out. Coordination with other countries with strategic reserves could help boost the United States’ supply, but that puts the administration back into the position of having to rely on diplomatic persuasion, which did not go over so well with OPEC.

Many people are angry over the price of gasoline, but it seems as if the President’s hands are tied. The United States is one small part in a constantly changing oil market, and one man cannot determine what happens within it. Between costs of refining and shipping oil, the need for tax dollars, and overall consumption in the United States, we may be seeing a $3+ price at the pump for a while.